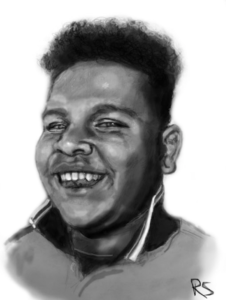 Click the portrait to see how the image was made.

Yonas licked his finger and smoothed his eyebrows. He straightened his shirt and then popped his collar. I lifted my phone to take the picture.

“I’m the only one since the 1980s who can pull off this look,” he told me, grinning, as I took the shot. His afro wasn’t picked out that day, but he was wearing his rolled up, high-waisted pants and his scuffed white sneakers.

He was hard to miss, even when he dressed down.

We first met in the summer of 2017. We passed each other on Fifth Street in Downtown Phoenix, where he flashed a quick, blinding smile. I encountered him a few more times over the coming weeks, hanging out at Bud’s Glass Joint (back when Lawn Gnome Publishing was still next door) and loitering outside Cheba Hut, and suddenly he was inescapable. I could find him any weekday sitting at a wooden bench next to Lost Leaf or getting American Spirits at Bud’s. He only smoked “natural tobacco.”

“This is my spot. This is my turf, you know?” Yonas said when I asked him how he knew everyone.

But Yonas wasn’t just a charming downtown personality. His charisma made him a valuable volunteer at grassroots organizations since his freshman year of high school. He began at Central Arizonans for a Sustainable Economy when he was 15, working on Prop 104 to expand the Light Rail as a volunteer. He moved over to the Arizona Democratic Party at 17, where he worked with La Machine to oust Sheriff Joe Arpaio.

Before his 18th birthday, Yonas had already had a career.

“I was what you would call the super volunteer, the one that actually showed up every time,” he said. He could gather twice as many signatures as his counterparts and became a team lead fast. His voter registration numbers, nearing 800, dwarfed those of his colleagues’. A number of Arizona politicians were vying for his attention this election season, he said.

Yonas’ own story is a remarkable one. He is one of seven children born to Somali refugee parents who moved to America after seeking asylum in Kenya. His sister was left behind before they reached the Kenyan border, and it would be almost two decades before the family was reunited. Yonas’ parents found strength in their faith.

“My parents are very Muslim,” he said. “I grew up very religious and went to the mosque.”

In his sophomore year in high school, Yonas broke his leg after while canvassing for a campaign. He shattered his knee in nine places, requiring three surgeries and year of recovery. During the recovery, Yonas stopped going to the mosque. And after I met him, he stopped speaking to his parents at all.

By the end of 2017, it was clear things were on a downward trajectory. His appearances downtown became more sporadic. He lost his apartment and started borrowing my bike.

And then he disappeared. Through the grapevine, I heard that he was on drugs. That he’d robbed a gas station with a gun.

I didn’t believe them.

The next time I saw Yonas, he was wearing an orange jumpsuit. His hair was cut short, unpicked, and he had “MCSO Unsentenced” stamped on his shirt, right above the handcuffs keeping his hands in his lap. We were in a Maricopa County courthouse at a trial management conference. Six other inmates sat alongside Yonas across from the judge.

His face lit up in recognition when I entered the courtroom, but the sign on the door saying “Do not attempt to communicate with the inmates” scared me. He immediately tried gesturing and I did my best to explain why I was there, but it was too complicated without speaking.

I wondered if mouthing words would get me kicked out.

His mother, wearing a white and green headscarf, sat in one of the rows of benches. Her English was halting, but she told me later she thought Yonas was innocent. Most of his family and friends didn’t believe the charges, either, until confronted with surveillance footage.

A few minutes into the meeting, a lawyer walked in and sat next to Yonas on the bench. While they whispered it occurred to me how long it had been since I had heard Yonas’ voice.

By the time of the court hearing in late 2018, Yonas had been already waiting for a trial for over six months. He was facing four counts of armed robbery, and if he went to trial, he’d be looking at 28 years.

His friends didn’t have any more details about the night he robbed three gas stations at gunpoint, but Yonas later told me over the phone that he had no memory of the incident. He was on a bender, abusing his prescription medication and drinking.

One of the gas station clerks had been pregnant. According to her, he’d has his finger on the trigger.

It was strange seeing him again. I wasn’t sure what to expect when I’d first entered those courtroom doors, but the absolute normalcy, the resilience of Yonas’ essence caught me off guard.

And even in orange, in the low yellow lighting of a windowless courtroom, his smile looked just the same. I wondered if his voice would too.

UPDATE: On May 1, 2019, Yonas was sentenced to three and a half years in prison. Although the judge had booked the largest courtroom at Maricopa County Superior Court, it was not enough to hold the over 100 people that turned out to support him and testify on his behalf.

The judge said she had never seen anything like it in her 17-year career, and knocked nine years off of his sentence.