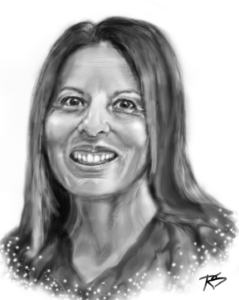 Terri talks about how and when she discovered her gifts in a very pragmatic and open way.

“I shut it down when I was kid, and so then I became more of a feeler, and knower, and hearer,” she tells me. “And at one point, I started seeing floating heads at night and I was, like, ‘Ok, this is a little weird.’”

As one of the founders of the company Chicks with Spiritual Gifts, Terri makes her living providing spiritual services to people. I am not a spiritual person.

She agreed to our initial interview easily, and I can’t help but wonder: has she had a premonition about me? Does she know I’m a skeptic?

On the other hand, if she does know about my beliefs already, I shouldn’t be a skeptic in the first place, creating the kind of paradox that makes my head hurt.

We hold the interview in one of the suites of a professional building where Chicks with Spiritual Gifts is housed. Calming flute music plays from an unseen speaker. Periodically, while answering me, she’ll say my name. It’s disconcerting – not many people do that as they’re talking to you. She also often asks me, “Does that make sense?” Every time I agree, it somehow cements her answers in my mind.

It’s clear that I don’t know about the certifications for this line of work, but Terri has many.

She has a certificate in Life Coaching from the UK’s Centre of Excellence (diplomas are offered online and start at £127) and has studied at the Morris Pratt Institute, an educational facility for spiritualists of all kinds in Wisconsin.

While different versions of spirituality have always existed, fact tanks like Pew Research have been increasingly interested in the meteoric rise of the “nones”: the nonreligious but spiritual population growing at a rapid rate in the U.S.

Everybody’s heard it before: “I’m not religious, I’m spiritual.” People in my generation are embracing astrology, Wiccan, crystal healing, yoga and chakras (plus the associated and essential commercial products, of course).

Terri has also noticed this trend.

“It’s gotten better, Rebecca. It’s more mainstream now,” she says. “When I was growing up that this was very taboo to talk about. People now know what the word ‘medium’ means.”

She also credits good vibrations in Arizona, which is on “the same meridian line as Egypt.” Combined with the international Tucson Gem and Mineral Show as well as the vortex in Sedona, it’s a good place for spiritual people of all kinds.

I ask her if she ever gets the feeling that clients are “testing” her, and she tells me it happens all the time.

“Some people come in and they want a specific name: ‘Tell me what my grandmother called me when I was five,'” she says. “The way it works with Spirit, I can’t dial up grandma… If grandma comes, grandma comes. But grandma has to work with my dictionary.”

When she says dictionary, she is referring to the complex associations that all words have for people: “For an example, a dog might be your pet, but to me it means loyalty. We see it from a different perspective.”

I also ask her about the widespread media coverage of psychic scammers preying on people who are mourning, most recently discussed by Gen Z favorite John Oliver. She doesn’t seem rattled by the question at all.

“It’s the same thing as any other thing you would have: doctors, teachers, clergy people. Are there bad apples? Hmm-mm,” she says. “So you’re going to say that all the doctors are scamming people for money? It’s combining everyone in the same category, which is not true.”

Terri grew up Lutheran, with a mother that dabbled in what she calls the “Dark Arts” – seances and Ouija boards and such. Lutheranism never spoke to her.

“I didn’t understand as a child why I had to go to a certain place to talk to God,” she tells me. “It just didn’t resonate with me.”

“It’s not my job. My job is just to give the message,” she explains. “I’ve had people that have told me I’m crazy and said, ‘This is not right.’ And then they’ve called me back and said, ‘I’m really sorry. You’re 100 percent right and I owe you money.'”

The only thing that gives me pause during the interview is her answer to this question: When did you know it was time to start charging money for your services?

“I’m not for the money. I’m here to help people. It’s a difference,” she says. “I used to do this for free, but the problem is that I was getting so sick. It’s called an energy exchange: what you put out it is what you get back.”

“It has to be some sort of exchange. It doesn’t have to be money. It could be helping or giving information or advice,” she says. “I realized, ‘Oh my gosh, I can’t keep doing this because I’m getting all of my energy sucked out of me and not getting it replaced.'”

The idea of energy being replaced by money makes me uneasy. Charging people for work seems natural, while an “energy exchange” does not. Clearly, Terri’s customers find immense value in her services, and having a fee seems pragmatic, if not essential. But maybe I’m just not understanding.

At the end of the interview, Terri hands me a weighty, crystalline rock with a yellowish color. Citrine, it’s called. The rock is smooth on the bottom with natural geometric forms along the top. It’s beautiful and heavy in my hand. She asks me what I feel, and I know there is definitely a right answer… one that I’m definitely not getting.

She eventually explains that the crystal helps people acquire and maintain wealth and prosperity, i.e. money. I feel like I’m just holding a rock, but after I get home, I think a little harder.

I come up with a better answer: my inability to feel the power of the prosperity crystal obviously means that money holds little sway over me. A good quality for a journalist, if I do say so myself.

But in the end, I have to admit I do like the accepting and loving foundations of new-age spirituality that Terri paints for me.

“I always say, ‘Take the pieces that make sense and let everything else fall.’”