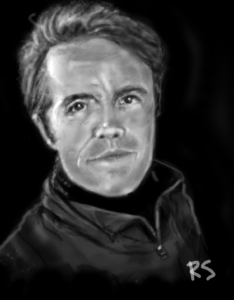 His hair is coiffed and his clothes are clean. He carries only a sketchbook and a small bag with him. Later, I learn that everything he owns fits on his motorcycle.

I’m not expecting an interview when I sit down to eat, but Roon, who had been sketching in his notepad across from me, prompted me to take a look at the sunset down Roosevelt Street. It’s not something I do often in Phoenix and it’s a shame. After we finish admiring the view, we start talking.

Soon I’m digging for my recorder.

The night before, Roon had slept at Papago Park. He says he looks for places that are safe, discreet and quiet. Roon takes his time between answering each question, like he’s weighing out his words. His voice is measured and careful even before I pull out the tape recorder.

He has been homeless in five other cities, but says getting help in Phoenix is tough.

“I think in terms of services, it’s the hardest,” he says. He’s slowly eating a waffle fry I’ve offered him. “There’s a pretty conservative streak in Phoenix, and Arizona generally. There’s a culture of independence and self-sufficiency.”

But Roon doesn’t usually seek out services like the ones provided at the Human Services Campus in downtown Phoenix.

“I don’t want to tax their services if I can handle it myself,” he says. “I’m often not taken seriously when I’ve tried to do them anyway because they’re like, ‘What are you doing? You’re a sane, competent individual.’”

“I’m like interloping in this segment of the culture that I’m not supposed to be in.”

Roon grew up in a town of around 2,000 people back East. He wasn’t a fan of religious, small-town life.

Roon’s ideas and memories of “home” are complex, and because of this, he argues the homeless population would be better referred to as “houseless.”

“The people who are supposed to be all lumped into this word… it doesn’t really fit,” he says. “The concept of ‘home’ is complicated. Who has a home? What is home? A lot of the people in Phoenix, I think, are homeless. Why are they here?”

For him, Phoenix feels like a city lacking roots.

“It’s grown really quickly for a city of this size, the fifth-largest city in the country,” he says. “None of the other big cities are that new, so they do have histories and identities. And that’s less prevalent here.”

Roon knows the homeless people living on the street are just as diverse as those indoors.

Roon has passed through different levels of looking “obviously” homeless in his time on the streets. He still finds it funny when other homeless people ask him for money. It’s something he would never do.

“I don’t like asking for that sort of help because it presents a lot of challenges. You don’t want to appear vulnerable to people,” he tells me. “If you appear vulnerable, in some sense, it’s like people come out of the woodwork to try and exploit you… I’m sure everyone can tell you, that’s lived on the street, their own stories about a person trying to exploit them.”

Roon also says he makes sure to take care of himself despite his living situation.

“There’s all sorts of reasons why the people on the street that you see look crazy or are acting crazy. Hygiene is one of those things. If you can’t stay clean, it’s going to make you crazy,” he says. “The foundation of your hierarchy of needs has been totally depleted.”

“All of those eat away at any sort of potential higher-level thought.”

When I ask him if he has more sympathy for those experiencing homelessness, his answer surprises me.

“No, actually. I think I lost sympathy,” he says. “If there’s something that’s foreign to me, it’s easier to exotify it and feel sorry for it, because I don’t really understand it… So having lived on the street for some time, been houseless, I understand that whole concept a little bit better.”

“That’s still there in me somewhere. It’s not as much of a yearning as it used to be,” he says. “Some people in that small-town life that I came out of, it nourishes, it gives them everything that I’m still searching for.”

A few days after our interview he sends me a picture he’d drawn, abstract shapes forming the image of a woman. The image was doubled and flipped to display every intricate detail in the background. The sketched lines were overdrawn with perfect, methodical lines, like blueprints.

“This one flowed quite freely, reflective of the mindset instilled by the conversation,” he wrote.