We meet at a Starbucks in the middle of a construction zone.

I realize I’m woefully unprepared three minutes into the interview. I was lazy in my planning, thinking that Kristen would spin me a fantastic tale of survival if I pried just a little. But she doesn’t see her story as miraculous the way I do, and she doesn’t capitalize on self-aggrandizing stories.

We first met each other on a group flight headed for Athens for a study abroad trip, but it took a few weeks before we spoke.

She was a pillar of competence and mental health during the duration of our travels. Being perpetually in awe is a kind of tiring that is so fundamentally privileged it’s not often discussed, but it still exists. By the end of the trip everyone was burned out except for Kristen. She never broke, never said anything unkind, never even looked tired. 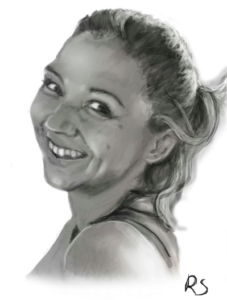 Click the image to see how the portrait was made.

She’s the kind of comfortable and accommodating that can only come to someone who’s seen so much worse.

Kristen smiles politely when I poke random questions and she answers honestly and with patience. She tells me about the foster care system, Child Protective Services, father figures in and out of prison and the marks they left behind.

Sitting across from her, months after our trip, we don’t have much to talk about, and it’s clear how aimless my questions are. We’re not in Greece anymore. We are in our real lives, working and going to school, and the shine has worn off of everything.

And yet her story still resonates, plain in her telling but belying how much she has actually survived. Her support system is herself, and she has overcome.

I think I find her fascinating because I don’t understand someone who can draw all of their strength from themselves. The complex networks that hold me together are always being tested with late-night phone calls, desperate knocks on doors and half-hearted apologies when I lean a little too hard.

How can someone truly do it on their own?

I hold the same fascination for other people in my life, chief among them my mother and my partner. I believe psychologists refer to their ability to survive as resilience, and the people who possess it are inexplicable, anomalies just for existing.

This is where the patterns of systemic abuse are broken.