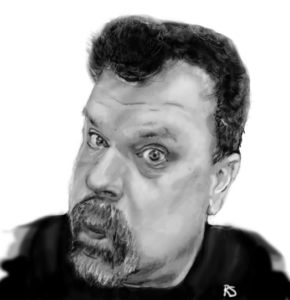 The first thing Klute ever said to me was, “Would you like to buy a book of poetry about sharks, for sharks?”

We were at the 2017 Phoenix Zine Festival at Unexpected Gallery, and I bought the book immediately. It was a slender blue volume that delivered exactly what his pitch promised: poetry written from shark’s point of view, in turn funny, scary and irreverent.

The book, titled “Chumming the Waters,” is the amalgamation of what are arguably Klute’s two biggest passions: poetry and sharks. Klute is a stage name, a leftover from his handle on Bulletin Board Systems, the precursor to other online messengers in the 80s and 90s.

“I chose the Klute, which was an obscure character in an even obscurer British science fiction show played by Deep Roy,” he explains during our interview. (The show was Blake’s 7. You might also recognize Deep Roy as the Oompa Loompas in the Charlie and the Chocolate Factory remake.)

“At the time I was 18, 19 and I was like, ‘I’m just gonna choose something that no one will suspect who I am’ – you know, big tall white guy, short little Indian guy.”

The name became a good luck charm, and now the only people who still call him by his real name are his father and his work.

It’s clear Klute is a practiced storyteller. He has a comforting, deep voice – a kind of TED Talk voice. He pauses for emphasis and pacing while talking. I can hear how he capitalizes on these traits during his slam performances, turning up the volume and the rhythm of his speech.

The entire conversation is an interviewer’s dream: he presents a clear narrative of his life and gives it to me perfectly packaged.

He recalls exactly when slam poetry first caught his attention.

“Nineteen ninety-eight. I remember the year because my ex-wife and I had gotten a divorce. We got married very young, we got divorced a year and a half after that. I was at ends. I didn’t know what to do with my life,” he says. “On 60 Minutes they had a whole thing on poetry slam.”

He found a cafe that held events in West Palm Beach and sat in.

“I watched and judged the first night. I was very cocky, very arrogant. I was like, ‘I can do this. I can beat these people senseless with what I got,’” he says. “So I wrote three poems and I show up the next week and I put my name in the hat and get my ass handed to me.”

“Just absolutely destroyed,” he says with a chuckle.

“I’ve been to the semi-finals three times and made group finals once,” he tells me. “I list these off as accomplishments, and they are, but at the same time, was my work in 2009 any appreciably better than it was on years that I didn’t advance? I don’t think so.”

His love of sharks, however, blossomed much earlier than his talent for poetry.

Growing up, “my backyard was the ocean, so I’d be in there all the time,” he says. He and his friends swam often, daring each other to see who could go farther out to the buoy lines that marked the edge of the lifeguarded area. “You had to do solo. It was a test of your manliness or whatever.”

One day, Klute swam to the buoy line alone.

“I look down, and I’m in about twenty feet of water, and there was a gigantic smalltooth sawfish,” he says. If you don’t know what a smalltooth sawfish looks like, imagine a regular shark but with a chainsaw strapped to its head. It is cartoonishly, comically terrifying.

“It was probably five or six feet, but the ocean magnifies things by twenty percent and I’m also a little kid, so this thing is kraken-sized,” he says. “They’re almost extinct now. It’s one of those things where I wish I’d savored it more.”

But as an accomplished poet with a niche interest, Klute has had great success at places like Shark-Con in Florida. In 2017, Klute interviewed Anthony C. Ferrante, the director of all six  Sharknado movies. The convention organizer invited everyone out to dinner the first night.

“The entire time that he was there, he was sitting across from me, and he was still producing the movie as we were speaking. He was like talking to his people in LA,” Klute says.  He showed Klute some of the footage in the film. “He said, ‘Do you believe this? Do you believe this is a flying car?’ And I’m like, ‘Yea it looks good.’”

“So I like to think I had some involvement in the Sharknado series,” he says with a laugh.

In 2014, Klute wanted a change of pace. He’d proven himself in the slam poetry circuit and created “socially-conscious” pieces like “Adam and Steve” advocating for gay rights.

“People would come up and say ‘Thank you for doing that poem’, which is great, which is wonderful to hear. But it was also like… preaching to the converted,” he said. “The one thing that I wanted to get back into was marine conservation.”

So, in 2014, he went to work with great whites at Guadalupe Island in Mexico, travelling with research scientists, thrill-seekers and even a couple on their honeymoon. It was, he says, an “absolute disaster.”

Hurricane Norbert swept over the area right before Hurricane Odile, which was the most destructive of the season.

Even though the research vessel was 200 miles away, the harbor master refused to let any boat under 500 tons go out the first day. The research boat was 499 tons.

But things didn’t get better once they were able to get out on the water. Klute said he knew it was “snakebit,” or cursed, from the beginning. As soon as they dropped the anchor, an elephant seal came up and waved at them with its flipper – a bad sign since they don’t go out when sharks are around.

They waited for five hours. Nothing.

Then, incredibly, a 14-foot great white shark appeared next to the boat.

“It’s gorgeous, but it only stays around for around 15 minutes,” Klute recalls.

He snapped a photo of the shark, its back speckled with the reflections of light from the surface, white stomach barely visible , gills thick folds at the junction of its fins. It’s now on the cover of his book.

Read more of his work here.