John is a thin, tall guy with a salt-and-pepper beard and the energy of a 25-year-old. He dresses like one, too, with skinny jeans and Vans shoes, but it suits him still. He talks fast, dropping in expletives, “you knows” and “likes” into every other sentence.

John runs a coffee shop called Jobot in a part of downtown Phoenix that looks nothing like it did when he first arrived 11 years ago. 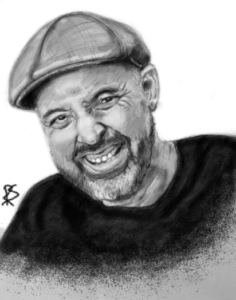 Click the photo to see how the portrait was made

In those early days, the neighborhood on Fifth Street was populated with wacky characters: bums and artists and potheads and bike enthusiasts. And soon, John was entrenched.

“It was this pocket, man, that nobody knew existed, but you went there and it was so full of life, so vibrant,” he says, leaning forward in his chair. “And It was lawless. We could do anything we fucking wanted. Nobody was watching.”

John’s a Phoenix native, and in a lot of ways, the unruly, empty slate of downtown in the early 00’s was the perfect place for his businesses to come of age. But the first time John saw where he’d open the initial iteration of his coffee shop, as part of a co-op called Conspire in a duplex on Fifth Street, he was not impressed.

“It was the middle of summer. It was before anything was going on down here,” he says. “It looked like a war zone. There were burnt up houses and shit. There were zombie people walking around. It looked like the stupidest thing ever, to get in on this thing.”

Lost Leaf, a bar across the street, had just opened up two weeks prior. John spoke with the bar’s owner over a couple beers, and walked away two hours later ready to invest in the co-op. He knew something was coming.

“There was this group of people that really love being down here and they were really steamrolling something,” he says. “First Friday was kind of hopping. It just seemed like there was reason for people to come down here.”

After a lucky break with a man named Randy, he was able to get all the equipment he’d need to run a coffee shop and worry about making payments later. And the desolateness of the area had perks.

“There was no cops. There was no city people coming down and regulating how late we were open or what we were fucking selling or whatever. We could really do whatever the fuck we wanted to do. So we did,” he says. “We had all-night concerts. We were selling weed cookies and we had people living inside the building. Man, it was awesome. It was heaven.”

He and his Conspire business partner came up with their own currency, Phx Bux, in partnership with a local artist named Chadwick. They created 3,500 coins, worth one dollar each, square-shaped with a cutout hand in the center and “In Art we Trust” engraved on the sides. At least 25 downtown businesses accepted them.

The local and national media ate it up.

“That press brought business to the co-op. That, I think, really was our turning point. That’s when I feel like Fifth Street really was a place on the map,” he says. “It wasn’t backed by gold or oil or anything. It was a piece of art and it had an intrinsic value.”

The project would only run for a little over a year.

“It didn’t have the foundation to run for a long time,” John says. “So we just let it fall apart. It was just another project that came and went, like everything else on Fifth Street.”

John was still fully invested in the Co-op when a bike shop across the street called Hoodride closed.

“When he moved out the landlord approached me and said ‘Hey man, have you ever thought about doing something more than just this Conspire gig? I feel like the coffee shop is really kind of carrying the whole program.’”

So John rented the new place and dubbed it Jobot Coffee, meant to sound like “Robot” because, according to him, that was the only thing he knew how to draw — and would therefore save marketing costs. Then John ran into another lucky break, in the name of a 6-foot-7 do-gooder named Dr. Joe who lived next door.

“After he became a doctor, he was living the doctor’s life in Scottsdale and all that shit,” John tells me. “He looked around one day and he said, ‘Man, dude, I feel like I’m really squandering my good fortune on all this high rent and fancy cars and cheap women.’”

So he gave it all up and rented house for $300 a month on Fifth Street, right next to Lost Leaf. He drove an old-school muscle car, a noisy ‘78 Nova. He’d do 30-minute health consultations for one Phx Buck.

“He heard that I was having problems opening up the new Jobot because of money and he gave me ten thousand dollars,” John says. “He just gave it to me. I know, it was fucking amazing. I know. I couldn’t fucking believe it.”

“Everybody’s like coming by and they’re like, ‘Dude, it’s fucking packed and this guy ain’t even trying. He’s got all this shitty equipment and the toilet in the bathroom‘s broken or whatever but the place is packed,’” he says. “So we had a good run of maybe about five, six years where we had just no competition at all because nobody could keep up.”

But Jobot wasn’t John’s only downtown project. Halfway through Jobot’s 7-year run on Fifth Street, he opened a place called Not Jobot (Get it: “Nacho Bot”?) that sold nachos 24/7.

“We’re doing it inside of an apartment. Nothing that I’m doing in there is legal,” he says. “So the city finally shows up and they’re like, ‘Dude, you can’t be doing this. There’s a million fucking hazards you’re causing.’ And I asked: ‘What can I do?’”

The answer, naturally, was to open an ice cream stand named Melt there instead.

The ideas kept coming. The next one was a joint venture with Jobot’s landlord: a bar called “The Liar’s Club.” The whole point was to start rumors about the venue; They were going to claim the shower scene in “Psycho” was filmed in the bathroom and lie about famous people supposedly employed with them. The bar’s nemesis? Honest Abe, obviously. The urinals would be outfitted with pennies and the big party every year would be to commemorate John Wilkes Booth’s birthday.

But John had a falling out with the landlord and an ultimatum was set. Jobot had to leave its duplex on Fifth Street.

“Really, what I was thinking of doing was moving to Mexico to live in Rocky Point for a while,” John says. “I thought I’d just kind of move out there and work with my hands.”

Fortunately, the owners of Oliver’s Sophisticated Bean, an unsuccessful restaurant at the base of a new apartment complex called Roosevelt Point, offered John a spot just a block over. Jobot’s new location is sprawling and industrial-looking, with a 20-tap bar and a full food menu.

When I ask John if he misses the old low-slung duplex, he tells me he does every day.

“Everything was a lot smaller,” he says. “Over here, It’s so big and so grandiose, and we have to do everything so much bigger and so much louder.”

He mourns the loss of the other businesses on Fifth Street as well, little passion-projects started in places where hulking apartment complexes now stand. Today, only three or four originals remain, like MonOrchid, Lost Leaf, and Made.

“All these new people, they talk like, ‘Yeah, we’re gonna hype this area up, we’re gonna do it,’” he says. “We already had something popping off here. All you had to do was assimilate. But all they did was destroy.”

“Everything is gone: knocked down, tore up.”