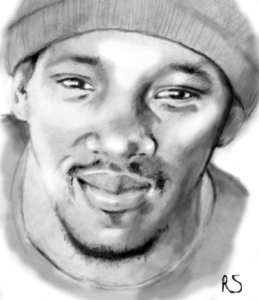 Click the image to see how the portrait was made.

I met Danny for the first time in my living room. He was holding a beer and chatting with my roommate in Kinyarwanda, the native language of Rwanda. It’s a language that sounds almost like singing.

He’s a soft-spoken 25-year-old with a thick accent that changes American R’s into something more rounded: “remembah,” “foe-give.” He’s handsome, noticeably so, but not in a way that makes him look any less kind.

He’s late to the interview we schedule a week later; he was helping two refugee women buy cars. This is par for the course, as he currently works for International Rescue Committee, an organization helping refugees, asylees and other victims of torture settle into their new homes.

“We help them find apartments, find social security, find food stamps. After six months of helping them establish, they are on their own, but we follow up. Whenever they are failing they come back to us.” Danny smiles when he talks about his work. It’s clear he takes pride in helping others.  “At the end of the day I see them paying bills. I see their kids going to school.”

Danny’s own story started on April 7th, the beginning of Rwanda’s 100-day genocide of the Tutsis by the majority Hutu government. Danny was just shy of three years old when his parents were murdered in front of him by a man who had worked with their family for years.

The worker spared Danny, hiding him under a bed, where he stayed for two days before being discovered by other fleeing villagers. Danny spent the next months hiding in the bush, slowly covering the 200 miles to Uganda.

Before Danny’s group reached the border, they were caught by two Hutu soldiers. He recalls standing in line in front of a mass grave, next to the woman who had been carrying him. The soldiers were asking for money; if you paid, you were shot. If you had no money, they used a machete to cut off your limbs before killing you.

“She put her arm on my face. She said, ‘Don’t worry, don’t worry. I’m gonna pay for you. You gonna die in peace.’” Danny falters for a moment when he tells me this, seeing the look on my face. He does this periodically through the interview, checking for my reaction to see if he needs to stop. Danny is highly aware of the effect his story has on other people.

It’s clear he thinks about this in regards to his future as well. “I don’t want to have kids. I don’t want them to hear my story,” he says. “Maybe I will change. I never even think about getting married. I feel like I’m protecting someone.”

Danny did not end up in the mass grave. Another faction of villagers arrived, distracting the soldiers. In the ensuing massacre, Danny and a dozen other children fled and hid under a UN worker’s truck. The worker eventually drove the children to the border of Uganda and left them.

In Uganda, refugee children were quickly placed in homes.

“People were coming to take kids, because they knew they were assets. The first family, it was hard because I never went to school. I was not sleeping in the house for about five years. I was just sleeping with cows. But then at least I got milk and I was safe.”

He worked growing crops and taking care of livestock in exchange for shelter.

In order to study, he alternated one month of trekking the 15 miles to school with one month of working under his contract. He earned perfect grades and volunteered for the refugee community throughout high school.

He keeps reminding himself that he survived.

“I thought about committing suicide a hundred times, maybe a thousand, but then I remember this guy never killed me,” he said. “I would be stupid to kill myself.”

When Musa moved to the US after high school, he became involved in the refugee community again. Now, he has seemingly endless projects underway. He’s built 400 houses in Rwanda, mostly for single women and widows. He donates blankets to the homeless. He is raising money to buy school supplies for children in Burundi.

One of his professors urged him to speak about his experiences to other students, but Musa said no: “I don’t want to be seen as someone who survived genocide and use that to say I’m a hero.”

“I want people to respect me for who I am, for my daily actions.”