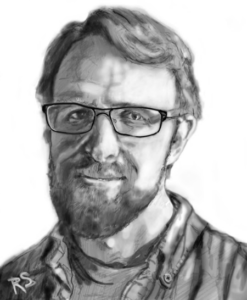 Andrew works at a hulking computer in Jobot.

It takes me a while to warm up to him. When someone pitches themselves to be a part of this project, a number of red flags go up. I’ve learned that most people who think they are worth talking to are not.

But Andrew is not most people. After I sit with him and watch him work on his computer, I realize his art is unlike anything I’ve ever seen.

“I got what they called the Vive when it first came out, two summers, a summer or so ago,” he explains. “I ordered it from Europe. It was the first place that had it.”

The Vive is a virtual reality, or VR, headset with two controllers allowing the user to step into a new world.

“Basically, you plug up these sensors that are infrared and they shoot out signals out to the headset and these two controllers that you use,” he says. “It’s the only VR system that is fully immersive, meaning you can actually walk into and around the VR world.”

Andrew creates his art using the 3D goggles, and has slowly transitioned into using projectors, allowing others to witness the process. Using props add to the uncanny ability of his artwork to feel alive.

“I got into projection painting because I wanted to segue this experience to people, because not everyone has a Vive,” he says. “So I started developing, experimenting with all the brushes in two dimensions but I was still painting in three dimensions… It was amazing-looking because the Vive, the brushstrokes animate to music and it starts to get really crazy.”

Colors change and pulsate based on the beat of the music he works to, slithering and undulating on the real surfaces.

“I got my own illustrations of fantasy art, and I started actually painting on top with the Vive, overlapping the real paintings with VR painting. I was animating them. It was amazing,” he says. “There’s all the murals in Arizona, and basically I want to animate those murals.”

Downtown art venues like FilmBar and Unexpected Gallery have already featured Andrew on First Fridays. He’s new to the area, or as new as me anyway – still not fully attached. In that weird place where you’re not sure whether you should be ashamed to not know where landmarks are.

His eyes are downturned in a puppy-dog kind of look. During the interview, he sometimes looks like he’s assessing me to guess what answers I’d like to hear. It’s a pet peeve of mine. He also apologizes to me after most of our talks, for being “distracted,” for not giving me a bite of a sandwich I jokingly asked for, for talking too fast.

He feels the need to justify everything to me. I want to shake him, to tell him what I think doesn’t matter, just tell me what YOU think.

This uncertainty seems to translate into the rest of his life as well.

“I wish I had the courage to quit my job and pursue art full time. I feel like I have a different opinion,” he tells me. “The realist in me wants to stay employed wants to save money and organize my life… The passionate, artist person in me just wants to jump all into this thing, just fuck everything else. So I’m torn in some respects. I wish I had the courage, or the organizational skills, or the ability to make the right choice.”

You’ve got the ability, believe me. Just do it.